Many early Presidents of the United States used train travel, as part of their campaigns either out of ease or necessity, including Abraham Lincoln; but Harry Truman traveled by train to help reconnect with the people. One of the locomotives used during that tour is the Grand Trunk Western (GTW) 6325, which avoided the scrappers torch mainly due to her participation.

Built in February 1942 by the American Locomotive Company (Alco), 6325 was one of 25 4-8-4 “Northern” type locomotives in the Grand Trunk Western’s U-3-b class. These standard gauge steam locomotives featured 73″ diameter drivers that allowed the locomotives to operate both freight and passenger service.

The U-3-b locomotives were workhorses for the GTW, known for traveling up to 250,000 miles before needing major servicing, and 6325 proved equally durable for the company. The locomotive proved herself over her revenue career and was selected to participate in Harry Truman’s campaign in 1948.

While Truman enjoyed a popularity hike following the end of World War II, his approval ratings plummeted ahead of the 1948 election. In an attempt to reconnect with citizens, Truman travelled nearly 22,000 miles by rail during the campaign. During his tour of Michigan, Grand Trunk Western 6325 pulled Truman’s train including the “Ferdinand Magellan” passenger car used by Truman during stops. The tour proved to be overwhelmingly successful with more than 500,000 combined attendance for 6 stops made in the “Mitten” state.

Following the Truman tour, Grand Trunk Western kept 6325 active for another decade. But by 1959, the GTW’s movement towards dieselization meant GTW 6325’s retirement.

Understanding the historical significance of the locomotive, GTW elected to donate 6325 to the City of Battle Creek, Michigan, instead of sending her to the scrapping line. After receiving a fresh paint job, the locomotive was put on static outdoor display in 1960. Unfortunately, the locomotive received very little upkeep over the next 25 years, and deteriorated significantly.

After arriving in Ohio, 6325 would sit idle in the OHCR shops for several years. Restoration efforts finally began in 1998; and by 2001, the former Grand Trunk Western locomotive was able to steam again under her own power, with her first excursion service coming in September of the same year.

The locomotive would be active for the next few years as she led many excursion trips and made appearances at several festivals and photo opportunities. In late 2004, the locomotive was removed from service due to an issue with driver axle bearings. Then, in 2006, the OHCR ended its steam locomotive operations, putting 6325’s future in doubt again.

6325 at the Age of Steam Roundhouse

In 2008, Jacobson sold his ownership stake in the OHCR, though he retained his collection of historical locomotives. To preserve and protect his collection, Jacobson built the Age of Steam Roundhouse in Sugar Creek, Ohio. Completed in 2011, 6325 was moved to the roundhouse with the rest of the collection.

Today, the Age of Steam Roundhouse Museum offers visitors a wide collection of locomotives and other steam era artifacts to view and learn about, including Grand Trunk Western 6325 on static display. Although there are not currently plans to return 6325 to operation any time soon, the AoSR strives to keep her in good condition; so you never know.

Visit the Age of Steam Roundhouse Museum website to learn more about 6325 and their other collection of historic steam locomotives.

The Age of Steam Roundhouse Museum is home to many historic steam locomotives, including AT&N #401, a decapod that is known as the ‘Lindbergh’. 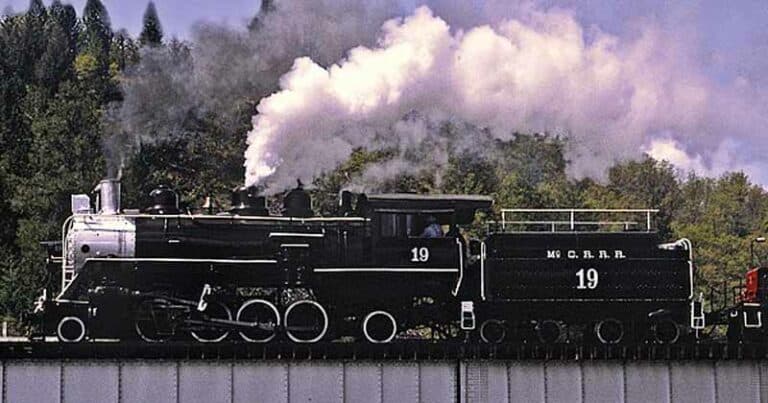 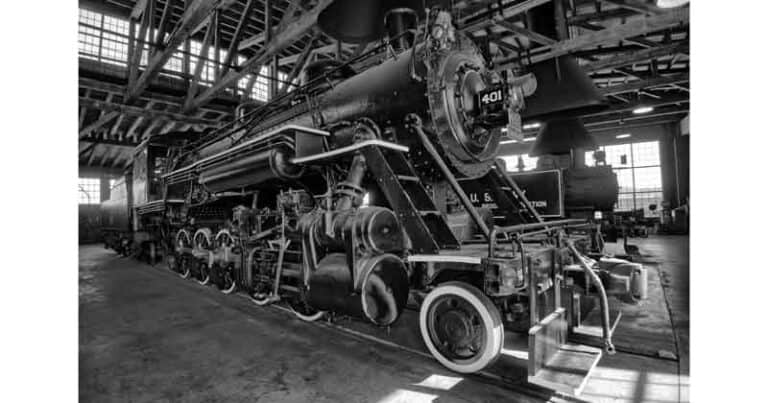 When the first Decapod type steam locomotive design was introduced…