Among the steam survivors at the National Museum of Transportation in St. Louis is a war-veteran nicknamed MacArthur, also known as Chicago & Illinois Midland (C&IM) #551. Now the only surviving steam locomotive from the little known coal hauler, #551 has established herself as a fan favorite even as she sits next to more famous locomotives like Frisco #1522.

Weighing in at 497,300 pounds fully loaded, #551 provided the muscle the up and coming C&IM needed. At the time the #551 and her sisters were built, they were the largest locomotives on the Chicago & Illinois Midland’s roster and remained so until the arrival of 2-10-2 (a Santa Fe type)steam engines in the 1940s.

Owned by Commonwealth Edison, an electric company in Illinois, the railroad was primarily used to serve ComEd mines in Central Illinois with the coal going to ComEd power plants north of the mines. Due to their size and capability, #551 and the other F-4 locomotives were primarily used to run coal service between Taylorville and Peoria, Illinois.

As mentioned, under the Whyte notation, used in the United States and other countries to classify steam locomotives, a locomotive with the 2-8-2 wheel arrangement is known as a ‘Mikado’, which is Japanese for ‘Emperor’.

Following the December 7th, 1941, surprise attack on Pearl Harbor by the Imperial Japanese Navy, the C&IM reclassified their 2-8-2s as “MacArthur” locomotives in honor of the US General of that name stationed in the Pacific Theater, a popular move among railroad operators at the time due to anti-Japanese sentiment.

The C&IM “MacArthur” locomotives pull a lot of coal through the war, and after, but would see their revenue days end and officially be retired in 1954. Although the other two locomotives were scrapped, cut up for their steel, in 1954, #551 was donated to the National Museum of Transportation.

Today, the locomotive remains on static display at the NMOT near St. Louis, Missouri. Although, she is uncovered, the locomotive has been well maintained by the museum. There have been discussions throughout the years of restoring MacArthur to steam; but there hasn’t been any movement beyond discussions.

To learn more about the museum including the full NMOT roster, which also includes a Union Pacific Big Boy, head over to the National Museum of Transportation website.

You can also learn more about the C&IM in the last days of the coal hauler, when diesels provided the muscle, with the DVD From Green to Orange, The C&IM from 1986 to 2005. 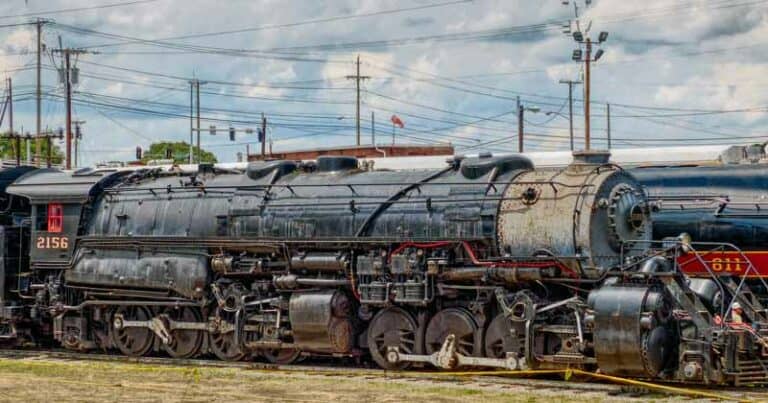 When it comes to steam the Norfolk & Western (N&W)…