When it comes to steam the Norfolk & Western (N&W) Railway was known for the locomotives built in its own shops to its own specifications. One of the most successful home-brew locomotives are the Class Y5 and Y6. These locomotives were designed with power needed to pull heavy freight trains through the Appalachians. The only survivor, Norfolk & Western #2156, is preserved in St. Louis.

Norfolk & Western #2156 was built at the railway’s shops in Roanoke in 1942. The locomotive is a Mallet type articulated steam locomotive featuring a 2-8-8-2 wheel arrangement. Although she was part of the N&W’s ‘Y6a’ class, she was equipped with a larger firebox that was used on the ‘Y6b’ locomotives which significantly increased her power output.

As built, the N&W steamer produced more than 152,000 lbf of tractive effort and with modifications she could hit 166,000 lbf, making her the most powerful steam locomotive surviving today, though many people often give that title to Union Pacific’s #4014 Big Boy since that locomotive still operates today.

Her revenue career was pretty uneventful as she led freight trains through the Pocahontas, Radford and Shenandoah divisions of the Norfolk & Western. The locomotive would also be used in transportation of coal which was a large source of business for the company. Because of its ties to the coal industry, the railroad was reluctant to switch to diesel powered locomotives. Even after being removed from mainline service in favor of diesel power, #2156 continued to serve the railway by powering coal trains into the late 1950s.

Mainline Motion Pictures has several programs dedicated to Norfolk & Western locomotives, including N&W Steam in the 1950’s, which features ‘Y6’ locomotives like #2156.

By 1959, N&W had moved to diesel power and #2156 was retired in July of that year. Shortly after she was retired, Norfolk & Western donated #2156 to the National Museum of Transportation in St. Louis, Missouri. Once at the museum, the N&W locomotive was placed on static display, where she would remain for more than five decades. After more than 25 years at the museum, N&W #2156 underwent a cosmetic restoration in 1985, though she remained static.

In 2014, Norfolk & Western #2156 was part of an agreement between the National Museum of Transportation and Virginia Museum of Transportation that saw the locomotive temporarily moved to Virginia for display while a diesel locomotive was sent to St. Louis. To celebrate the arrival of #2156, the locomotive was put on display with two other Norfolk & Western survivors, N&W #1218 (Class A) and N&W #611 (Class J), which collectively were known as the railway’s ‘Big Three’.

Following a five year stint in Virginia, the locomotive made her way back to St. Louis in 2020. Although she does not seemed destined to steam again any time soon, #2156 remains on display at the National Museum of Transportation along with several other pieces of steam railroad history. Head over to the museum’s website to learn more about the roster, including the most powerful steamer still around. 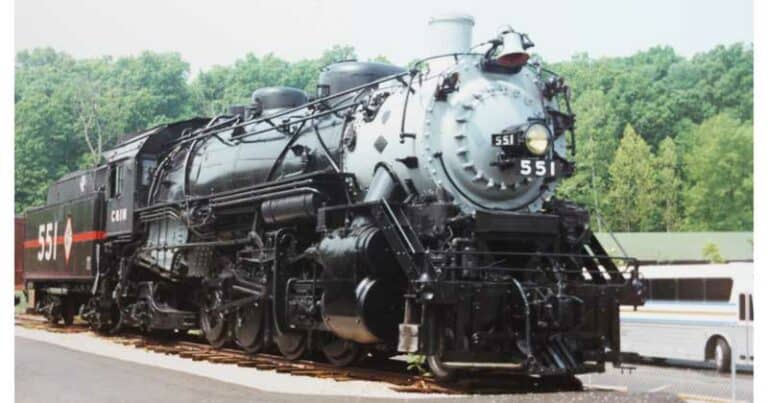 Among the steam survivors at the National Museum of Transportation…