Steam locomotives played a vital role in the development of the United States, thanks in to their ability to transport large amounts of heavy freight over long distances. The designs of the iron horse were consistently improved upon to maximize power and functionality, allowing them to pull longer and heavier trains over ever steeper grades.

In some cases though, grades and environmental issues proved to be too much for even the most powerful steam locomotives of the day. While some railroads could adjust a route to mitigate the problem, some railroads could not and so took a different approach – electrification.

Compared to steam and diesel, electricity can provide locomotives with significantly more power. They also eliminate emissions from the locomotive itself, which is important for locomotives that operate in mines or other enclosed spaces. For instance, tunnels.

Although there were significant benefits to electrification, the cost of the infrastructure needed to operate a completely electrified railroad make it prohibitive to do so along the long, long stretches of rural American railroading. That did not stop operators from looking into localized railway electrification systems that would provide power for specific operations and local areas. Many times, the need was for some help for steam engines.

The Norfolk & Western Railroad’s Bluefield Division in Virginia and West Virginia was an important line for transporting coal for the railway beginning in the early 1900s. The route averaged a two-percent grade with a 2.5% ruling grade near the Elkhorn Tunnel. The tunnel was a one track bottleneck.

While most of the route was double-tracked, the tracks consolidated into one running through the tunnel. Causing more problems for the N&W, once in the tunnel locomotives were limited to 6 mph, often causing significant backups.

The N&W was known for their powerful locomotives. Big articulated locomotives, like the A Class, see survivor #1218, and the Y Class series, moved mountains of coal for the railroad. But the combination at Elkhorn, steep grades, curves and slow orders through a tunnel – with fumes choking the crew – was just too much.

In 1913, the N&W partnered with Westinghouse to electrify a 27-mile section of track along the Bluefield Division. The initial project was completed in 1915 and had immediate positive results. Not only did the company see a significant increase in the number of trains that were able to travel the route, the electric locomotives allowed each train to haul more tonnage.

Tunnels and railroads go hand-in-hand. For more, get the DVD, Tunnels, & the Story of Underground Rails.

The N&W was so pleased with the results that several additions were completed over the years, bringing the electrified route to 52 miles in total. Following World War II, the N&W decided to build a bypass around the Elkhorn Tunnel. The new bypass significantly reduced the grade locomotives had to climb, and the N&W elected to abandon the electrified track.

The Virginian Railway (VGN) was another Class 1 railway in Virginia and West Virginia, also specializing in transporting coal. Similar to the N&W, the VGN faced several areas where inclines proved problematic, with the most notable one being Clark’s Gap in West Virginia.

After attempting to find solutions using steam power, the VGN began studying electrification options after seeing the success that the N&W had. Eventually the decision was made to electrify more than 130 miles of track in the mountains between Roanoke, Virginia, and Mullens, West Virginia. That section included that included Clark’s Gap at Flattop Mountain.

The VGN construction ran from 1922 to 1925 and cost approximately $15 million, which is more than $250 million in 2022 dollars. However, the project proved to be successful for the railroad, which continued steam and electric operations into the late 1950s.

The largest network of track with a railway electrification system was owned by the Chicago, Milwaukee, St. Paul & Pacific Railroad, better known as the Milwaukee Road. Believing that long term success required the railroad to expand west towards the Pacific Ocean, plans for an extension westward were approved in 1905.

It was to be a 2,300 mile extension westward, from the Missouri River in the middle of the continent to the Pacific Ocean via Seattle and Tacoma. This new line, built by a subsidiary, the Chicago, Milwaukee, and Puget Sound Railway Company, was built in only three years.

Underfunded and built very quickly, the Milwaukee Road (MILW) was plagued with issues on the Pacific Extension. Although most sections were relatively flat, the section through the Bitterroot Range meant early steam locomotives were constantly battling steep grades and very sharp curves. Furthermore, brutal winters in those mountains made it difficult for locomotives to produce enough steam to operate.

After much debate and research, Milwaukee Road decided to electrify a 438-mile section of track through the Bitterroots from Harlow, Montana, to Avery, Idaho, via an overhead electrical system. The electrified system was constructed between 1914 and 1916. It worked, the electric locomotives were able to out-haul and haul faster than the steam locomotives of the day.

The electric locomotive most closely identified with the Milwaukee Road’s electrification through the Bitterroots is the “Little Joe” locomotive, which at 12 axles were not little at all. The nickname came about after the locomotives were bought by Russia, but the State Department barred their sale due to rising tensions between the USA and the USSR. So, “Little Joe” Stalin locomotives is what they became to railroad workers.

Seeing an immediate positive impact on operations, the company then doubled down on electrification and began another project along the route between Tacoma and Othello, Washington. This time a 209-mile stretch that had caused similar problems over the Cascade Mountains.

The Pacific Extension never paid off for the Milwaukee Road. The need to electrify 645 miles because steam engines of the day just couldn’t handle the job added to $27 million dollars to the already over budget project. The railroad filed for bankruptcy in 1925.

It was a sign of things to come. The Milwaukee Road would file again in 1935 and again in 1977. Most of the Pacific Extension would be abandoned in 1980 and more in later years.

The same Cascade Mountains the Milwaukee Road conquered with electrification instead of steam were a problem for the Great Northern. Those mountains are where the Great Northern needed the push of big electrics. Great Northern’s mainline to Seattle had to cross the Cascades and they did so at Stevens Pass in Washington state. The first attempt at the pass in 1893 involved steep grades and even switchbacks. It was a bottleneck for the railroad and impassible for parts of each winter.

A tunnel was soon begun and the first Cascade Tunnel, a 2.6 mile long tunnel was opened in 1900. Steam locomotives were used to haul trains through the tunnel, but ventilation was an immediate problem and an ever present danger.

In 1909 the railroad gave up on steam, buying four boxcab electrics. These boxcabs only pulled each train through the tunnel itself. Trains would arrive at a portal where the boxcabs would couple on and pull the train through, uncoupling at the other end of the tunnel. In 1910 an avalanche at the west portal of the tunnel, where at the time a town with a hotel and railroad depot was located, killed 96 people.

Although not at fault, and in fact many railroad people were killed and others saved lives, the Great Northern decided this Cascade Tunnel was still too high on the mountain and so susceptible to landslides and other winter events that would hamper railroading. In 1929 the second Cascade Tunnel opened. It is 7.8 miles long and is still used today.

With the new tunnel came a new and beefier electric operation. No more would only the tunnel be electrified. The 73 mile section between Skykomish to Cascade would be under wire. The Great Northern would order a series of similar big electric locomotives. They were ordered in pairs and always operated in pairs.

While electric powered locomotives offered many benefits for the railroads in the short term, during the steam era, and even long term had they stuck with it – the initial upfront investment kept most companies away. In Milwaukee Road’s case, they ended up in bankruptcy in 1925 due to expenses surrounding the financing of the Pacific Extension and part of that was the associated electrification.

What we do see is that electrification has its place, its success stories. But those are limited to heavily urbanized areas and very specific instances when emissions or existing infrastructure force the issue. Localized electrification for railroads is now just a notation in the history books, but it had quite the impact moving goods and people 100 years ago. 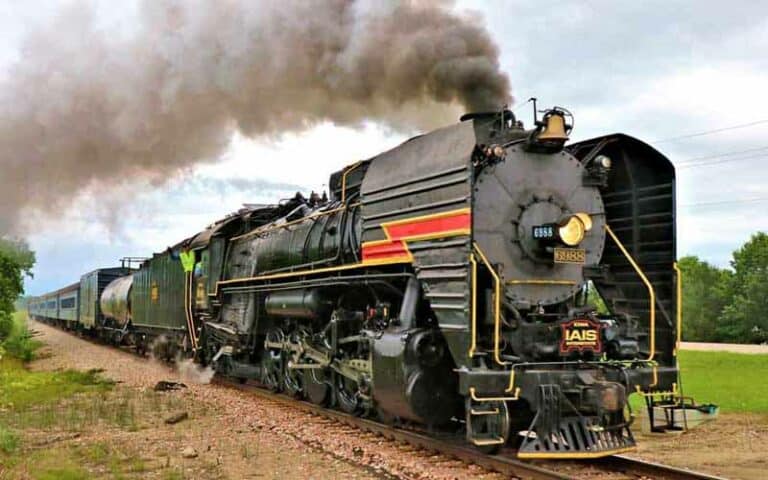