Born in Scotland in 1876 as Herbert Nigel Gresley, Gresley began his career with an apprenticeship at the London & North Western Railway before moving to the Lancashire & Yorkshire Railway (L&YR). Proving himself valuable, Gresley quickly promoted up and became an Assistant Superintendent of the L&YR in 1904 before taking a promotion with Great Northern Railway in 1905.

Six years later, Gresley would be named GNR’s chief mechanical engineer. Between 1911 and 1922, eleven different classes of steam locomotives designed by Gresley were built for the GNR, ranging from smaller 0-6-0 locos that were used in shunting to 2-8-0 Consolidation types that were used for heaving freight hauling.

In 1921, the British government passed legislation designed to consolidate the country’s 120+ railroad operations into four large companies to battle the financial issues many of these small companies faced. This legislation led to the creation of the LNER in 1923 with Gresley being selected to be the new company’s chief mechanical engineer.

Between 1925 and his death in 1941, Gresley designed 16 different classes of locomotives to run on the LNER. During this time he also created the ‘Gresley conjugated valve gear’, a technological achievement that could be seen on locomotives throughout the world.

Following a trip to Germany in 1933 to observe the Flying Hamburger, Germany’s first high speed diesel locomotive, Gresley wanted to bring the high speed technology to the LNER; but the costs associated with the new technology did not make sense for the railroad, so he became determined to develop high speed steam locomotives. His designs would go on to be world speed record holders.

In 1936, Grisley was knighted by King George VIII to honor Grisley for his accomplishments in the railroad industry and impact it had economically.

The A4 design made several improvements on the A3 design, including streamlining the internal steam circuit, which allowed for the new model to be significantly more efficient. Beginning with the LNER #4468, nicknamed the “Mallard”, these locomotives were upgraded with Kylchap double chimneys which further improved their speed and efficiency.

Originally known for being the first to receive the double chimney upgrade, the Mallard is more well known for her July 3rd, 1938 speed run. During a run designed to test a new braking system, the locomotive briefly exceeded 126 miles per hour, setting the world record for fastest steam locomotive. Designer Sir Nigel Gresley believed that 125 mph was more accurate – but still faster than the previous record of 124.5 mph set by a German locomotive in 1936.

If not for Sir Nigel, the LNER likely would not have experienced the same success and growth in such a short period of time. To honor him, the LNER named an A4 Steam Locomotive, possibly his most successful design, #4498 the “Sir Nigel Gresley”. Built in 1937, #4498 was chosen for this honor as it was the 100th A4 Pacific type locomotive built featuring Gresley’s designs.

For the first two decades of operation, the Sir Nigel Gresley operated with a single chimney; though the locomotive was retrofitted with several upgrades during this period. Eventually #4498 would receive a double chimney and blastpipe at the end of 1957.

The locomotive reserved her own spot in railroad lore on May 23, 1959, when the locomotive set the record for steam locomotive travel following World War II. Leading a full passenger train, the locomotive was able to establish a top speed of more than 112 miles per hour.

If you enjoy the sights and sounds of restored British steam going full speed on the mainline, you might like to see, “The Iron Road to the Isles“.

In 1948, #4498 was renumbered BR #60007 when the LNER was absorbed by British Railways as part of the country’s nationalization of their railway. British Railways would continue to operate the Sir Nigel Gresley in revenue service until early 1966.

When British Rail phased out all steam, once again Sir Nigel, the locomotive, faced an uncertain fate. Fortunately for the locomotive, the A4 Preservation Society stepped in and acquired the locomotive before she could be scrapped.

The locomotive has received several upgrades and rebuilds since her last revenue run, allowing her to remain operational and make several special appearances over the years. The locomotive was taken out of service in 2015 for an expired boiler ticket.

The “Boiler Ticket” in the UK is similar to the Federal Railroad Administration’s 15 Year Boiler Inspection in the USA. No locomotive can run past that mark. As in the USA, in the UK steam locomotives receive an extensive rebuild at that time. Over the next several years, between 2015 and 2021, the Sir Nigel Gresley was torn down and put back together again. 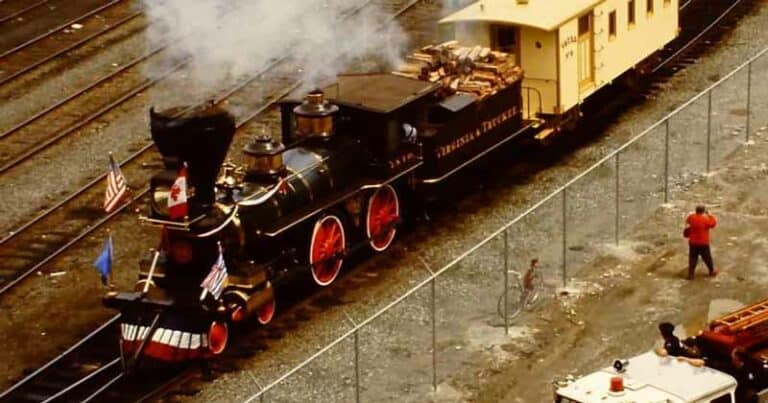