Located within the Silver Dollar City amusement park in Branson, Missouri, the Frisco Silver Dollar Line is the oldest 2ft. narrow gauge heritage railroad in the area. While the amusement park has many attractions, the steam locomotives are a big draw for the park. The railroad currently has 4 steam locomotives in active service: #14, #43, #76, and #504.

A Brief History and Current Status of these Locomotives

#14 is a 0-4-0T steam locomotive that was manufactured in Germany by Orenstein & Koppel in 1938. It was originally owned by Kies Und Schotterwerke Nordmark in Germany until it was bought by Jim Machacek for his Northfield Cannon Valley Railroad in Northfield, Minnesota. No. 14 was then transferred to the Frisco Silver Dollar and made its debut on the railroad as an excursion train in 2019.

#43 is another 0-4-0T steam locomotive built by Orenstein & Koppel in 1934. It has been under the ownership of the Silver Dollar City since the early 1960s and remains the oldest operating steam locomotive at the railroad heritage.

#76 was built in 1940 by the Ceskomoravska Kolben-Danek (CKD) of Czechoslovakia. Designed with a 2-4-0T wheel arrangement, it has been under the ownership of the Silver Dollar City since the 1980s. It was taken out of service in 2014 for a major overhaul and returned to excursion service a year later.

#504 is another steam locomotive from the CKD. It’s designed with a 0-4-0T wheel arrangement and was built in 1941. It was brought to the United States by Jim Machacek to be used on his railroad in Northfield, Minnesota. It was then redesigned into a tender engine in the 1970s and has been under the ownership of Silver Dollar City in 2016. It made its debut on the railroad in 2018 but was temporarily taken out of service in 2020 for repairs. It made its return on the track and remains the youngest operating steam locomotive at the railroad.

Information about the railway and Silver Dollar City

The Silver Dollar City amusement park, which is located near Branson, Missouri, is open from March-December with the the railway operating during park hours.For more information on these incredible steam locomotives and how to ride on them, you can visit the Silver Dollar City website.

Silver Dollar City is not the only amusement park with real steam locomotives that you can ride behind. In fact, a theme park in North Carolina is home to Tweetsie #190, a Mikado nicknamed the ‘Yukon Queen’. 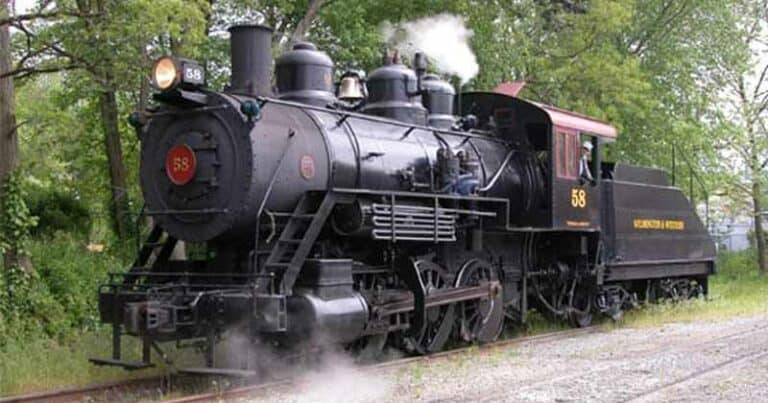